Dr. Eric Presser On the Dangers of Vaping 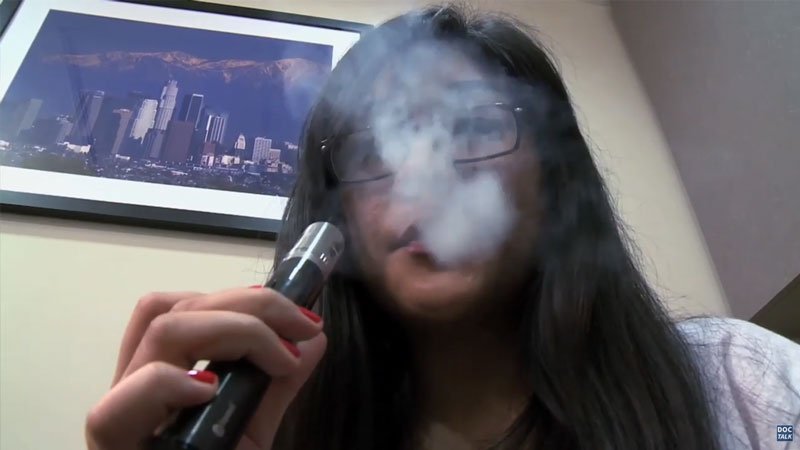 Vaping is becoming popular but is it safer than smoking cigarettes? Thoracic surgeon and author of an empowering guide to lung cancer, dr. Eric presse,r tells us about the increasing popularity and the possible risks of vaping. Vaping is when you heat up a liquid or solid creating a vapor that you can inhale and the reason why it’s so big right now is because many teenagers are vaping because they think it’s cool. In the news now a lot of people are comparing smoking to vaping. Now with smoking everyone knows that you use a flame or you use combustion and you create smoke.

Now, there are many toxins in that smoke that are very harmful to your health. The problem with vaping is that the verdict is still out on the long term effects. With vaping you can actually get the nicotine that you want or that you crave. You actually get the oral fixation of the device whether it’s an e-cigarette or a juul that you actually put into your mouth.

But more importantly by taking away the combustion you’re actually taking away most of the toxins in the smoke that are very harmful. The reason why that’s important is because we still know that there are toxins in the byproducts of the vapor, but we don’t know what the long-term effects are.

Dr. Pressor advises no smoking of anything but he does recommend vaping for one group of people

I don’t tell people to start to vape ever because as a thoracic surgeon the irritation and the inflammation that you cause by inhaling any toxic substance into your lungs is bad. I don’t care what the literature says. I don’t care what the short-term or the long-term effects are. That’s common sense. I would never tell someone to start smoking. I would never tell someone to start vaping okay, but, I have started to use it with my patients as a crutch, if you will, to try to go from smoking to vaping and eventually to quit.

What’s bothering me is all of the hype and all of the social media surrounding vaping, calling it safe it’s far from safe.

The danger of cigarette smoking is real. Is this also true of vaping?

In my book An Empowering Guide to Lung Cancer obviously I focus on the cause and effect of cigarettes and lung cancer. I can clearly tell someone that one in six smokers will get lung cancer and smokers live 14 years less than non-smokers.

The problem right now is that we don’t have enough information to give the statistics, but we do know that vaping causes extreme inflammation leading to cough, upper respiratory symptoms, and it’s detrimental to your health, your lung health which is what I also mentioned in my book.

My best advice is to never start smoking never start vaping never put anything into your lungs except clean air.