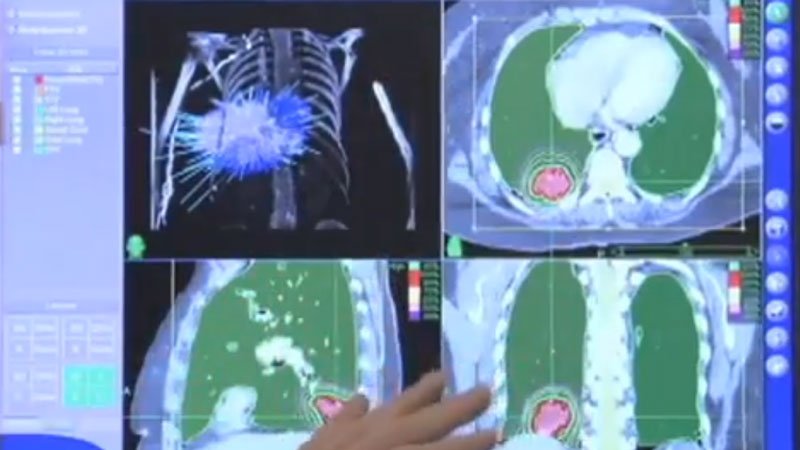 Dr. Eric Presser is a leading thoracic surgeon in Palm Springs California who specializes in the treatment of cancers of the chest.

The ability to perform operations using small incisions through minimally invasive surgery has been developed in many surgical specialties over the past decade. We spoke with Dr. Eric Presser of Desert Regional Medical Center to learn about this method of surgery.

I’m a thoracic surgeon, which means that I do everything in the chest surgically, except hearts and aortic work. And I try to do them through as small and incision as possible. So when I explain to my patients what I do, I say I do large operations through small incisions.

The patients that come and see me are scared and they’re scared because they have no information other than maybe what they see on the internet. And as we both know, the internet is chalk full of information that is, misinformative. So when someone leaves my office, not only do they understand exactly what the plan is, but exactly what I’m going to do.

Dr. Presser explained why minimally invasive surgery has better outcomes for the patient

If someone has a six or an eight centimeter tumor, and I have to make a six or eight centimeter incision to get it out, then obviously it’s not gonna be beneficial to make small incisions, do the whole operation through that. And then at the end make a larger incision.

The reason why we try to do things through smaller incisions is because it leads to a decrease in postoperative pain, less skin and tissue you cut through, you have less chance of infection and the patients, my patients, especially, leave the hospital sooner.

When they do leave the hospital, their limitations are essentially none. As opposed to when you do things through a conventional, through conventional techniques, such as a large incision or a thoracotomy, not only are they in pain, but you have to worry about them pulling apart or ripping apart, their incision.

If you have someone with a lung mass right now, most people will either try to perform a needle biopsy, via an interventional radiologist, or they’ll just watch it and see if it grows.

What I can offer the patient is to go in and literally wedge out that nodule. What I mean by wedge out the example I give is if you have a, a cake in your refrigerator and you take a, a golf ball and you put it in that cake and you cut out a slice of that cake that contains the golf ball, you’re essentially performing a biopsy, but at the same time, you are eliminating the pathology. You are cutting it out, essentially in total.

So at the same time, while the patient is asleep on the table, you send it to the pathologist, the pathologist then tells you one of two things, cancer, not cancer.

If it’s not cancer, then you’re done. And everyone’s happy because now the lesion is gone and pathology has plenty of tissue to figure out what it is.

If it is cancer, then essentially it’s one stop shopping. You can go ahead and perform a proper cancer operation sample the lymph nodes and in most cases you will do what’s called a completion lobectomy, which means that you will take out the remainder of the lobe, that the lesion mass spot they’re all interchangeable is sitting in

Dr. Presser talked about how the technology has changed for the better

The technology has changed with the dramatic improvement in the definition with the cameras that we use in addition to everything, the screens and the setup is not nearly as, as large as what it used to be. So you can, on one cart, you know, you wheel in, you know, essentially the camera and it’s all high Def at least what I’m used to is, you know, high definition equipment. And it allows you better optics.

What I’m offering patients is just another, I guess option, it’s in my armamentarium. I’ve been fortunate enough to, you know, be involved with and be trained in minimally invasive techniques.

So it doesn’t mean it’s for everyone, like we mentioned before, but at least I can sit there and talk to the patient and come up with the best plan and what the best option is for them.