Marijuana and Its Effect On Your Lungs 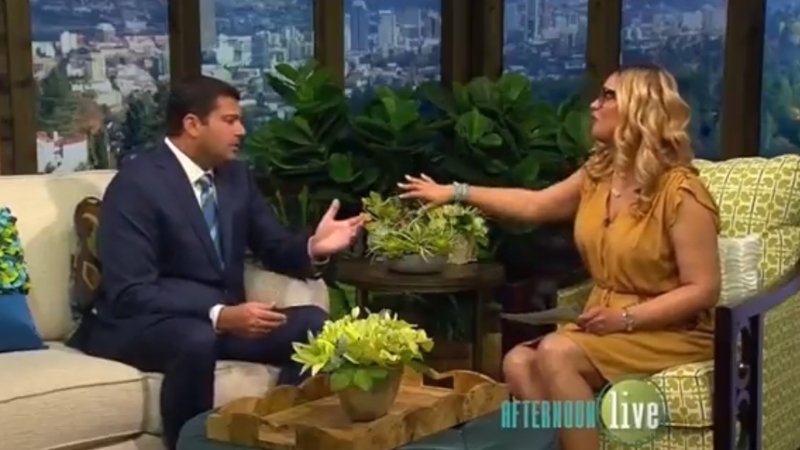 This article is a transcript of Dr. Eric Presser’s appearance on Afternoon Live on KATU2.

Dr. Eric Presser is a leading thoracic surgeon in Palm Springs California who specializes in the treatment of cancers of the chest.

Host: Marijuana, you hear it’s an herb and that it’s natural, okay, but how safe is it? Here to share more we welcome to the show the author of An Empowering Guide to Lung Cancer, Dr. Eric Presser, is with us. Dr. Presser welcome.

Dr. Presser: Oh thank you for having me it’s great to be here.

Host: Well it’s good that you’re here now because, let’s talk about it 4/20. Everybody’s talking about 4/20, it’s tomorrow, and people tend to partake in marijuana and they think that it’s safer to smoke that than to smoke cigarettes. What do you think?

Dr. Presser: So as a minimally invasive chest surgeon let’s be clear. The only thing that anyone should be breathing in is clean air

Dr. Presser: My patients that smoke cigarettes, I tell them that there’s a one in six chance that they will get lung cancer and they will live about 14 years less than non-smokers. Now we know the effects of smoking. Now, when it comes to marijuana not a day goes by where I’m not asked exactly what you are proposing. Marijuana needs more research.

Dr. Presser: …which is why I’m glad, to be honest with you, that in my generation it seems that the public awareness and the public education, not just with cigarettes but also with marijuana, is coming to a head, if you will, because there are so many beneficial effects from marijuana. See the problem is everybody pictures that guy sitting in the corner smoking a joint see it around thinking that he’s just doing nothing and not contributing to society. Host: Right. Dr. Presser: When if you actually research the positive effects of marijuana, meaning… they’re are drugs that need to be purified, it needs to be regulated, it needs to be taxed. All this petty stuff about you know, these, I think Oregon actually, was the first State to decriminalize marijuana and there’s so many more effects out there that we can concentrate on that are positive than people who are using it for recreation. And in my opinion and I’ve read a lot of articles, if you’re over the age of 21 then why not regulate it so that you can go into a dispensary just like you do here when you go out when you go out to dinner some you don’t have four shots of tequila every time,

Dr. Presser: …you might have a glass of wine and anyone who’s a connoisseur of marijuana understands that that is the same concept. Now going back to your original question of “is it healthier” the verdict is out but the problem with marijuana is that, most of the time when people smoke it they’re inhaling it deep, very deep and they’re holding their breath.

Dr. Presser: So there are toxins just like in cigarettes that are in marijuana.

Host: Even though it’s natural and it’s an herb, cuz that’s what everybody says.

Dr. Presser: Even though it’s natural, the combustion is still creating these toxic chemicals that are detrimental to long health. Let me be clear…

Dr. Presser: I’m not advocating that people go out and start smoking marijuana but if you’re going to, I also get a question of vaping

Host: Yes, that was gonna be my next one because then they say, well, that’s safer. Explain what vaping is for people who don’t quite understand.

Dr. Presser: So when you actually light up a marijuana joint or a pipe or whatnot you’re actually causing combustion.

Dr. Presser: And combustion means that you’re actually causing, taking a flame and lighting everything on fire

Dr. Presser: When you use an e-cigarette or a Juul or you’re using vaping you’re actually heating the substance that’s inside of the container. So what that means is that when you actually look at micrographs of the THC or the resin on the flower that you’re smoking, because it’s not being completely combusted you actually get a cleaner hit, if you will, you’re not necessarily inhaling all of the toxic chemicals. It doesn’t mean that it’s safer, doesn’t mean that it’s better. It just means that right now there’s no one that’s gonna tell you that it’s better than breathing clean air, but, it definitely has its benefits over smoking cigarettes.

Host: Oh okay. So now let’s talk about the lungs themselves what effect does marijuana have on the lungs if you’re smoking it, vaping it, I don’t know… eating it?

Dr. Presser: It’s a good point. You see now when my patients come to me and they ask me well, I like the effects of marijuana, and without going to a whole marijuana special here there are difference in the concentrations between the THC and the other chemicals that are in marijuana. Most people only know about THC and CBD and there’s about 85 of them.

Host: That’s already too many strands too many ways to make it or grow it. Dr. Presser: But there’s someone out there right now who is suffering from cancer, for example… Host: Right.

Dr. Presser: …and they need to eat and they are nauseated and they know exactly what strain is good for them to not make them high but to just get them through the day.

Dr. Presser: And that’s why we need more research in my opinion and to answer your question what does it do to your lungs? Well, anytime you breathe in any toxic chemicals it’s gonna cause inflammation which leads to more mucus production cough, and overtime, there’s no one who can sit there and not be commonsensical about this and say that smoking anything and putting it into your lungs is not going to be bad for you. We just don’t have the data right now to give you the statistics that I gave you before that the one in six smokers will get cancer because a lot of smokers also smoke marijuana.

Host: So Dr. Presser you know you’re gonna have to come back.

Dr. Presser: I would love to come back.

Host: I believe we need more education around this there’s just too much. But I appreciate what you shared today and what we’re gonna do is have more information. The book again An Empowering Guide to Lung Cancer. We’re gonna have that for you, the information, on our website at KATU.com. Thank you again